Welcome to the Ramping Up your English episode on Wildlife Savers – Episode 71. We begin this episode with some guidance in researching and reporting on Endangered Animals. 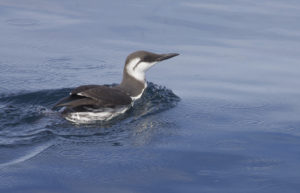 The common Guillemot is not endangered, as its name implies. Nonetheless, wildlife with the “common” in their names may no longer be common. They may need wildlife helpers to make them truly common again. 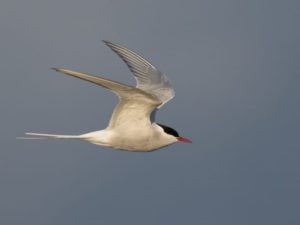 Arctic Tern – This bird holds the world record for the length of their seasonal migration. I was lucky to see some in Alaska.

Thanks to Archive.org, you can watch this program as free video on demand. Not only that, you’re free to download this and all episodes of Ramping Up your English. To see Episode 71 ad-free, click here.

Most episodes of Ramping Up your English run about a half hour. If you want to see shorter segments, you’ll find those below – each from 6 to 12 minutes long.

See Segment One by clicking here.

In this review, we looked at the terms that are used for the level of endangerment. We started with the most severe, in case the subject of your research is extinct. This sad designation is for animals that are no longer living on Earth, like all the dinosaurs – and those that only survive in captivity. We call those “instinct in the wild.”

As promised on the show, here’s a list of the terms we use for the degrees of endangerment.

Stable (Not an official category)

Common (Not an official designation)

Is making a comeback (Not official)

Is Recovering (Not official)

After this review, the focus shifted to sea gulls and the efforts being undertaken to help wildlife avoid endangerment. Seagulls even inspired a book by Richard Bach, a movie, and a soundtrack by Neil Diamond and Lee Haywood. The book and movie are entitled Jonathan Livingston Seagull. We had a brief look at one of my favorite birds, the tufted puffin.

Many organizations that are doing important conservation work give calendars to members – calendars that feature the wildlife that are being helped through their efforts. These include the National Wildlife Federation and the Nature Conservancy. Both groups keep members informed through magazines that share challenges and successes in helping wildlife – often through protection of habitat.

We also featured three local groups in Southern Oregon that support wildlife – those being the Southern Oregon Land Conservancy, Klamath Bird Observatory, and Wildlife Images Wildlife Rehabilitation and Education Center. We also looked at a cheetah recovery program from Wildlife Safari. These groups are just a few of those dedicated to helping wildlife.

Use connecting words to compose a sentence demonstrating a cause/effect relationship (between conservation status and causes of endangerment).

Use present tense and present progressive tense verbs to state the activities of conservation groups and agencies protecting wildlife.

Science: Explain the cause/effect relationship between agents of endangerment and an animal’s conservation status. Explain how actions by conservation groups and agencies mitigate the downward pressures on animal populations.

Links to Video Used in Episode 71

Here are some of the materials we used in this production. Click on a slide to enlarge it. Use your back arrow to return to this page. 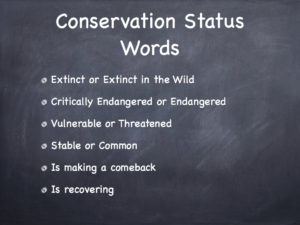 These are some levels of endangerment. Only some are used under the Endangered Species Act passed by the U.S. Congress 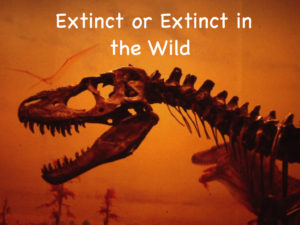 Extinction is forever. Dinosaurs are examples of extinct species. 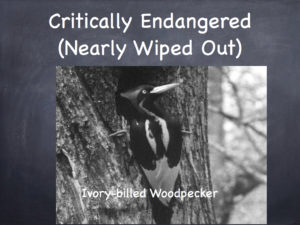 The Ivory-billed woodpecker is listed as Critically Endangered. None have been seen in many years. 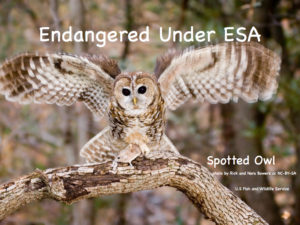 The spotted owl is listed as an endangered species under the Endangered Species Act. Their protection has slowed the harvest of old=growth timber in the Pacific Northwest. 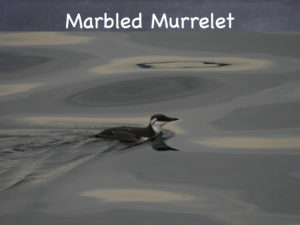 The State of Oregon this year listed the marbled murrelet as an endanger species due to habitat loss. Later in 2018, the state changed its mind, removing them from the list. 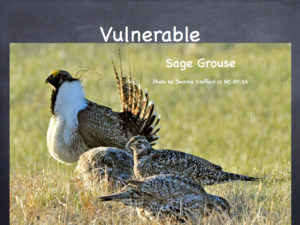 The sage grouse is an example of an animal that’s vulnerable to being threatened. A great concerted effort has been made to avoid having these grassland birds listed as endangered by cooperating to protect and restore its habitat. 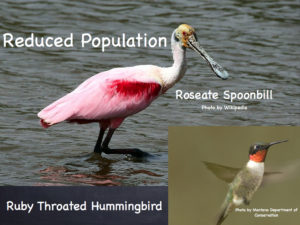 The Roseate Spoonbill and the Ruby-Throated Hummingbird are no longer threatened, although they do face challenges that could limit their populations. 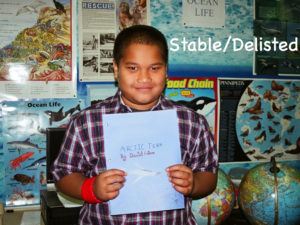 Arctic Terns are an example of wildlife that has a stable population. They migrate the greatest distance of all birds. 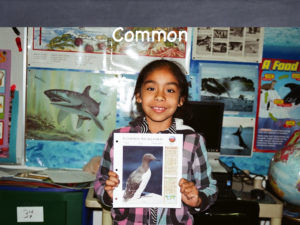 The tern “Common” can mean large populations, yet it’s possible for an animal with the word “common” in it’s name to be endangered.

As we produce this episode of Ramping Up your English, millions of people in the United States are standing up to the powerful gun lobby and the politicians they control. They’re demanding real change after the latest school shooting in Parkland, Florida. I’m very proud of the young people leading this movement. They’re claiming their right to life in our democratic republic.  Here’s a link to the March for our Lives in Medford, Oregon – just a few miles from where this program is produced. It’s positive look at the better aspects of the culture of the United States.

We take a closer look at birds in our next episode.  Click here to go to the Episode 72 page.