Comparing and contrasting freight trains and passenger trains is the objective of this episode of Ramping Up your English.  We use a Venn Diagram to organize our information, and two video clips to help us remember the basic characteristics of these 2 forms of rail traffic.  Watch the entire program by clicking here. 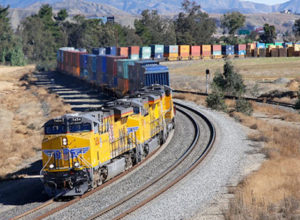 Language Objectives: Use connecting words and phrases Both, they differ in that, whereas, and however to compare and contrast similar objects. Use a Venn Diagram to organize information for comparing and contrasting.

Compare and contrast two familiar objects, using some of the vocabulary in the lesson below. Examples could be cars and trucks; trains and airplanes; boats and ship; or any other things that have traits in common as well as differences.

In the lesson, we demonstrated how to organize information for the function of comparing and contrasting.  After watching a video clip on freight trains, we listed 3 things that are true about freight trains that are not true about passenger trains.  They were:

Most freight trains don’t run at a scheduled time; instead they leave when their consist is complete.

After that, we listed three things that are true for both:

They both run on rails

They both are pulled by locomotives

They both are operated by skilled crews

We then began with the middle section to compare the 2 types of trains.  We used the word BOTH to show that we’re comparing the two….showing how they’re alike.

Both Freight trains and passenger trains run on rails.

Now we used the words: BUT THEY DIFFER IN THAT… to show the contrast.

They differ in that they carry different payloads

Now we used the word WHEREAS to put these thoughts together.

We used some closely-related facts to compare and contrast, using information from our chart.

We also used the word HOWEVER in the place of whereas..

Video Clips:  We used 2 video clips from which to draw our information about passenger trains and freight trains:

<Note: To see Cardinal Westbound 1, watch Segment 1 of this episode.  See the link above.>

Freight Trains (a clip from an earlier episode, so we have information to organize.

Some viewers have commented that I must have ridden on all of Amtrak’s trains.  Not true! However, I have taken all the trains linking the West Coast with the rest of the country.  I took the legendary Empire Builder to Chicago back before I owned a video camera.  Viewers still get to see what that journey is like plus test their listening skills with an interview about that train in Episode 23.

Materials Used in Program: Click image to enlarge; use back arrow to return to page. 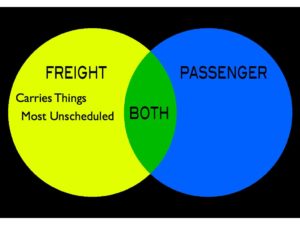 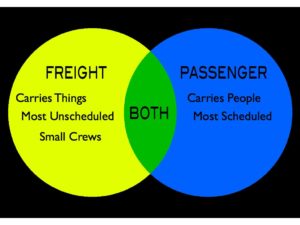