Poem Comprehension and recognizing opinions are the focus of Episode 18. Click here to watch Episode 18 of Ramping Up your English.

Welcome to the Episode 18 page.  This is the episode with the Langston Hughes book.  It’s also the first where I use music, beginning with “The City of New Orleans.”  I do some commentary about comparing Amtrak to private railroad passenger service in the past.

Here are some links to Langston Hughes Poems, including THE NEGRO SPEAKS OF RIVERS

Here’s the Wikipedia article on the poem

Hear Langston Hughes read the poem on You Tube

There are no video clips available for this program.

Use prior knowledge of a subject and visual clues to identify the theme and retell the story contained in lyrics (of the song “City of New Orleans.”  Use key phrases to express an opinion.  Recognize key phases that indicate an opinion, and distinguish opinion from facts. Distinguish expressing an opinion from persuasive language. Using visual cues, identify the theme of a poem. Recognize the use of first person point of view in literary works.

History (Transportation): Trace the decline of passenger trains in the United States and the role Amtrak played in saving passenger rail service. Distinguish fact from opinion when listening to content about historical events. American English Literature: Identify the theme of a poem by Langston Huges. Identify historical allusions in poetic works. Identify the literary element of Onomatopoeia in poetic works. Explain the function of Onomatopoeia in literature.

It is written that Love Is The Answer.

I Agree, but sentences starting with the words “I Love” are stating an opinion, just like the words on slide 2 Identifying Opinion.

When you hear or see these words, know that you are encountering an opinion, not a fact. You can use these words in your own writing or speaking to express your opinion, which is an important language function – and important in self-expression.

Wording like what’s found on this slide is subjective. This is clearly an opinion, although I used these words based on what I know about Amtrak.  Factual statements could include on-time performance, results of customer (passenger) surveys, or any other objective data. Despite my strong belief in the statements I made with these words, these were clearly opinions and not facts.

I hope this lesson was useful in distinguishing fact from opinion. Today’s mass media contains far more opinions than facts, so be skeptical in what you believe.  I further hope these tools will help you in expressing your own opinion, which you have every right to do.  Opinions clearly have their place.  It’s just important to know that they are not the same as facts.

I want to acknowledge actor John Campbell for his performance of Langston Hughes’ poem. In my opinion, he did a WONDERFUL job!

Write or tell a friend or family member about your opinion on a topic. Use some of the language in the above slides to make it clear that you’re expressing your opinion. The topic could be that there nees to be more passenger trains in the United States (or another country with which you’re familiar. The opinion could also be about something very different, like couples should (or should not) live together before getting married. Remember to make it clear that you’re expessing your opinion on the matter.

We transition from poetry to song lyrics in Episode 19 of Ramping Up your English.  Click here to visit the Episode 19 page.

The name of the book about Langston Hughes is Langston’s Train Ride published by Scholastic Books.  It’s only available through the School market- so you may be able to order it through your teacher.  Also, check your school library if you’re still in school.

We step into the world of music again in Episode 19 of Ramping Up your English. 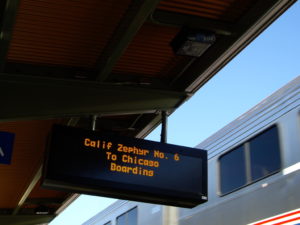