Ramping Up your English takes you to the wild interior of Alaska on Alaska Rails and shows how to write the basics of a state report.

Alaska became part of the United States of American when the U.S. bought it from Russia back in the 1860’s. Alaska became the 49th state to join the Union and now holds the county’s largest national parks, including Denali, where we catch the train to Talkeetna. Clear flowing rivers, towering  mountains, beaver dams, and mountain lakes are all visible on this train ride.

Watch Segment One by clicking here

Alaska would be a great choice for someone tasked with writing a state report.  All states have their symbols.  You can find them on the internet easily enough, but how do you write about them?  That’s the focus of this episode. 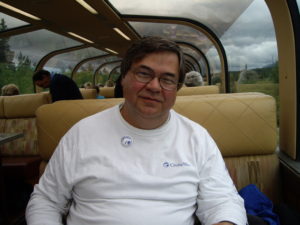 Academic Content Objectives:Geography: Name and describe some of the land forms encountered in Alaska’s interior. Report on the state symbols of a state. Assemble information about a state for use in a report. Maps: Locate sites on a map of a state. Trace the route of the Alaska Railroad on a state map. Identify a National Park in the state of Alaska.

When communicating the facts about a state, there are multiple ways of writing about them. You can state the feature and then use the word “of” to link it to the state, as shown first in the slide below. Alternately, you can use the possessive form of the noun. When you click on a slide below, it should fill the page.  Use the back arrow to return to this page on the LetzCreate.org website.

State Motto: North to the Future

To visit the webpage of Alaska’s government, click here.

Next, Ramping Up your English takes you South, way south to Amtrak’s Surfliner train. Click on the Episode 30 page to see what’s next.