How do zoos and discussion skills find their way into the same episode of Ramping Up your English? Read on to find out. 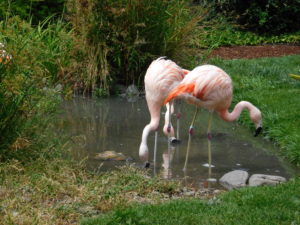 You may not have 30 minutes to watch the entire episode.  No problem!  Below are links to Episode 47 segments, each lasting about 10 minutes.

In this Episode, we enjoy scenes from a number of zoos.  We learn about the vital functions of zoos in education and wildlife conservation.  We also remember that zoos are the most popular form of entertainment in the United States, outperforming sporting events and music concerts. For most people, a trip to Asia or Africa to see the wild animals there is out of the question.  Many people get their first look at those animals at zoos.  Zoo goers learn about the habitats of a variety of animals as well as their conservation status.

We use the videos about zoos to learn more about them, but they also set up the topic for our discussion about zoos.  Host John Letz discusses the pros and cons of zoos with Lisa LaPierre.  We model a respectful, informative, and enriching conversation in contrast to discussions that form the public discourse in the United States today.  Respectful discussion is offered as an alternative to the contentious nature of conversations we hear of commercial radio, television, and even on the street in contemporary society.

The source material for our discussion is found on Wikipedia.  Click here to read the article for yourself.

We featured a video about zoos.  Click here to watch the video on You Tube.

Here’s the video Dash through the Dallas Zoo with footage from Cousin Luke.  Click here to see the video without ads.

Academic Content Objectives: Science: Explain the role that zoos play in animal conservation, including endangered animals. List concerns about zoos and the limitations they have in their conservation mission. Social Studies: Explain how the function of entertainment affects the management of animals in a zoo. List some of the pros and cons of operating zoos in the United States. Connect facts with opinions about the validity of zoos as means of wildlife conservation.

This episode and the one that follows is an attempt to give English Learners the tools to participate in effective public discourse and to recognize and express their opinions. Our approach is in contrast to the tone of public discourse in the United States today. As our society has become increasingly polarized, people’s ability to benefit from discussing issues with people of other viewpoints has been seriously diminished.  The right/wrong dichotomy, the pattern of attacking and demonizing those with different opinions (especially those who would express an opinion labeled as “liberal,” and the raw physical force (out-shouting others or invading their personal space)  of those who feel that only their opinion counts – has suppressed the viewpoint of many Americans.

Some complain that  “political correctness” has equally shut down true discourse, and I feel that they have a point.  The trouble is that the ugly response – while perhaps “evening the score” – has not resulted in the type of public discourse needed in a democratic republic like the one in which U.S. citizens live.  I assume that some of those viewers who want to improve their English skills are interested in the United States as a place they may want to visit of even live. Whether an English Learner is living in the U.S.A. or plans to spend time here, learning to discuss issues and exchange viewpoints in a more respectful way will make interpersonal life more peaceful and enriching. While the demonstration of discussing an issue is a very small step, I feel it’s important in the sense of doing what I can do.  It’s in this spirit that I produced this episode and the next. Our demonstration was indeed contrived, but viewers can note the language we use and the general approach of exchanging ideas in an atmosphere free of attack.

I’ve recently learned that much of the ugliness and aggression we’re seeing did not grow into existence in any organic way. I’m struck by the huge role that “alternative media” have played in setting this tone.  Numerous websites have shocked their visitors into believing things that have no relation to facts. This relentless attack on reality has left people confused or motivated to take harmful actions against innocent people. Nor has this media been an accident in its development. Some very wealthy people have developed and supported these sources of misinformation in an attempt to bend society to their greedy desires. This has been going on under the radar for many years, and a sizable portion of people in the United States form their opinions based on the stream of lies that have been intentionally disseminated through this media. A fearful reaction to these actions is justified when it becomes evident that vital decisions are made based on the agendas of billionaires who profess to hate people with liberal viewpoints. It’s not that they take issue with their ideas or that they disagree with them.  Hate is the word they use.  It’s also the word they use in their reaction to our government.  There has always been a place for disagreement about how people in the United States should govern themselves, but hating our government and those who have different viewpoints does not bring about any positive change.  Indeed, by shutting out the ideas of others, it makes positive change almost impossible.

In Episode 48, we examine the wording that’s effective in participating in respectful, enriching discussions. The English words we use to express opinions in a way that’s not offensive are listed and practiced.