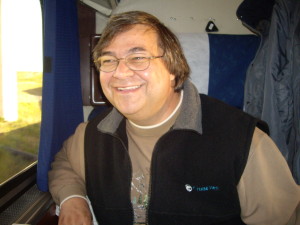 Here’s an update for Ramping Up you English. Choose the Episode you want to see from the chart that follows:

You can find this same list here with more detail. It’s our unit page for Trains and Railroads.

To visit our unit on Animals, (beginning with Episode 33), click here.

To visit our unit on Native Americans (beginning with Episode 79), click here.

Other Programs from John Letz –

Episodes 15 and 16 are now available.

Episodes 11 and 12 are now available.  Click below to visit the episode pages.

Adventures in Education is an RVTV Voices series about positive things happening in the world of Education. To watch the programs, click here.

Episodes 9 and 10 of Ramping Up your English are now available.  Click below to visit their episode pages.

Episodes 7 and 8 are now available!  Episodes 9 and 10 should be up in a week if all goes well.

Episodes 5 and 6 are now available!

May 30 was a productive day at the Digital Media Center.  I had a big crew, and we produced the next 2 episodes of Ramping Up your English.  There were some technical glitches, so I had to do some post production work on Tuesday.

Go to the Episode 3 page to view the program and see the support materials.

Go to the Episode 4 page to view the program and see the support materials.  Scroll down for links to previous programs.

Ramping Up your English has two series times on RVTV.  The times when you can watch the program are: Wednesdays at 8:00 AM and Thursdays at 7:00 PM.  You can watch the current episodes of Ramping Up your English in Southern Oregon on channel 15 on the Ashland Home Network, and on Channel 182 on Charter Cable.  The program can also be streamed at SOU’s Streaming service. Episodes 3 and 4 are scheduled to be produced on May 30th. Our first two episodes can be viewed at the above times, or at archive.org.

On April 4th, Ramping Up your English produced its first 2 episodes!  With the help of my fantastic technical crew, the first two episodes are  available for intermediate level English Learners seeking to reach a higher level of English Proficiency.

You can get started by visiting pages for Episode 1 and Episode 2. You’ll find the TV segments as well as assignments to speed up your acquisition process.

You can watch some of the video clips I used in the first episode of Ramping UP Your English.  Click on Episode One Video Clips.

Our first unit of study is Trains and Railroads.  Why trains? We’re using a common experience to help activate what you already know in your native language.  It’s an example of Content-Based English as a Second Language – an approach shown by research to have better long-range outcomes that traditional ESL models.

Also, it’s fun to see trains and learn about them.  It’s true that learning a second language is a huge undertaking.  It’s often hard.  It takes a lot of time.  It can be discouraging.  It seems overwhelming at times.  It involves risks and sometimes embarrassment. It can also be fun, and the less stress you have learning the language, the better you’ll learn it.  Let’s keep it fun and interesting!

Ramping Up your English (RUE) exists because of the support of the Public Access Channel (Voices) on RVTV in Ashland, Oregon.  If you’re curious, you can visit their website at Rogue TV.  I’ve been producing a TV show about positive things happening for school children in Southern Oregon.  My program is call Adventures in Education. To see one of these programs, visit Archive.org and use the name Adventures in Education in the search box. While Adventures in Education is  program about education, Ramping Up your English is an educational/instructional program.  My first production opportunity in April 4th. I can hardly wait!