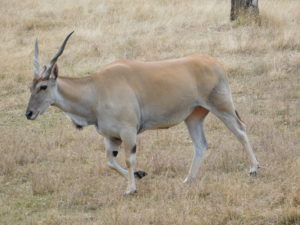 We can learn a lot about animals in Africa by looking at their diet, hence this episode entitled African Animals-Diet. You may think of diet as something that restricts what you eat, but in the animal world, diet means what an animal does eat in its natural habitat. You’ll be familiar with some of the animals on today’s episode as they were featured on African Animals in Episode 56. We also add some new African animals in this episode.

[Quick grammar/usage moment – Notice I used the word “does” before the verb “eat.” This is for emphasis. The word “does” is a form of the word “do.” We have to use a form of “do” when asking questions, but not in an expository sentence – except for emphasis as I did here. We’ll have lesson on this in a later episode.]

Name 10 African animals using their English names. Use connecting words to describe the diet of an animal.

Name some animals that are native to Africa. Describe how certain animals meet their need for food on the grasslands of Africa. Explain how physical adaptations allow animals to get food in their habitats. Describe the social structure of hamadrayas baboons. Identify the physical traits that distinguish Cheetahs from other great cats. Explain the “fight or flight” response and demonstrate how animals in the same trophic role can differ in their response to perceived threats.

Episode 57 introduces more African animals and explains the trophic roles of several of them. Zebras are introduced as an animal that can be described using a familiar animal (a horse) for similarities, thereby making its description easy for listeners or readers. Listing the differing traits then becomes the way to modify the description. The diets of zebras, as well as their behavior as a herd are explained.

Hamadrayas Baboons are also featured to explore social behavior in a highly patriarchal structure. We learn about their diet as well. We shared connecting words to communicate facts about an animals diet without using the same wording as our source of information. We use some connecting words that ramp up the level of communication, teaching ways to avoid over-use of beginning words.

Cheetahs were featured in this episode, demonstrating how an animal’s adaptations allow it to secure food in its habitat. We also learn about the temperamental differences that can exist between animals at the same trophic level. It’s all about how an animal’s adaptations and its temperament help it secure food and determine its role in food chains and the food web of which it is a part.

forces them to eat

Use some of these connecting words to communicate the diet of the animal you’re researching. You can add to this list using words from the source of information you’re using in your research, but use other connecting words for this report so you’re not tempted to copy the wording used in your source.  That’s how you’ll gain the skill of communicating information about an animal’s diet.

Here are materials used in the direct instruction portion of this episode. Click on a slide to enlarge it. Use the return arrow to return to the Episode 57 page. 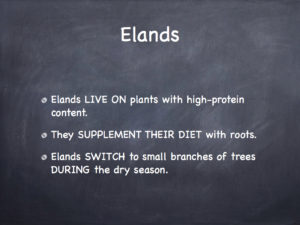 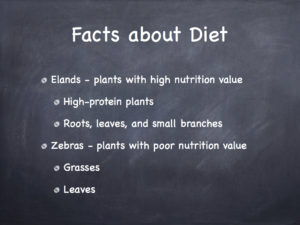 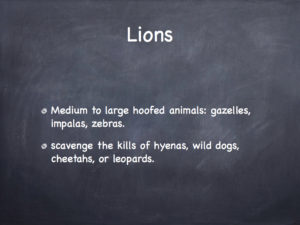 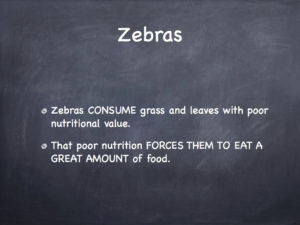 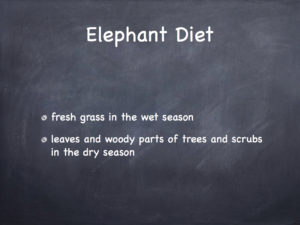 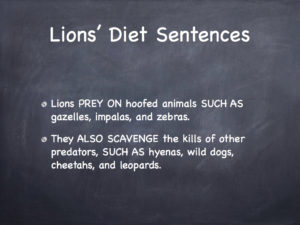 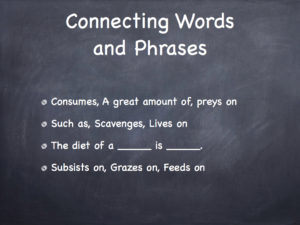 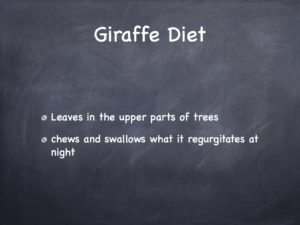 Learn more about using language functions in English to report on research about animals. Visit the Episode 58 page by clicking here.

You can watch Episode 57 in its entirety add-free by clicking here.