Ocean Life Behavior Adaptations are the focus of this episode of Ramping Up your English. 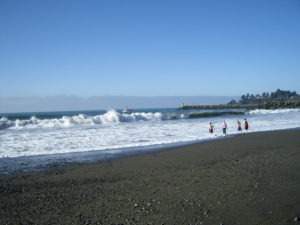 The behavior adaptations of the animals that call the ocean their home are the behaviors that help them survive and thrive in their expansive and highly diverse environment. Previously, we learned about physical adaptations on ocean animals (See Episodes 64 and 65). Now we look at what orcas, humpback whales, and sea otters do to give them an advantage for living in today’s oceans.

For viewers who are writing a report on their chosen animal, recognizing and reporting on an animal’s behavior adaptations should be easier after viewing this episode. For those who just want to know more about animals that live in the ocean – or who just want to see awesome footage of ocean animals – this episode has a lot to offer.

You can watch this entire episode without ads by clicking here. That takes you to archive.org. You’re also free to download this Creative Commons program from the website.

You can also view this episode in shorter segments.

Use present-tense verbs to describe on-going actions. Use sequencing words to describe a natural process. Name ocean animals after seeing them described in a video.

Then we look at orcas (commonly known as killer whales – but they’re not whales). We consider how they gain an advantage over their prey using cooperative behavior in their hunting practices. We also learn how humpback whales (these are true whales) work cooperatively to confuse and corral their tiny prey to maximize their food intake.

Whale watching was the focus of one video clip, with some stunning video of killer whales and humpback and fin whales. Elementary school children shared what they have learned about whales during a unit for English Language Learners. A short video about the behavior adaptations of sea otters further reinforced the knowledge of behavior adaptations.

To watch the video about Whale Watching, click here

See the video Kids and Whales.

Link to outside video

Watch orcas hunt cooperatively to prey on a crab eater seal. WARNING! The orcas succeed in their hunt.  Click here to see this YouTube Video.

Find behavior adaptation of the animal you’re researching. You may find this info under Behaviors, Food or Diet, Enemies or Threats or Predators. You may also find it under Anatomy – how your animal uses a physical adaptation. An example would be the flat tail of a beaver. It slaps that tail in the water to warn of danger. That’s a behavior adaptation. Take notes of these behavior, noting only the facts. We’ll teach the words and phrases needed to communicate this information in future episodes.