We look at the role of the Wildlife Refuge in this Episode of Ramping Up your English. President Theodore Roosevelt designated the first wildlife refuge in the United States, and we’ve been adding to that one ever since. 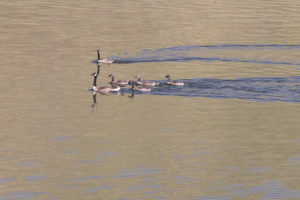 Canada Geese don’t always migrate, but those that migrate benefit from the National Wildlife Refuge System along the Pacific Flyway. Photo by Cal Holman. See more of his work at calholmanphotography.com

While Ramping Up your English can be seen as a series on RVTV Voices in Southern Oregon, it can be accessed free as video on demand at Achive.org. from anywhere in the world. Click here to see the entire episode ad-free. If you want to download this episode, you can do so free of charge. Just choose the format you want on the right side of the page.

Watch Episode 69 in shorter Segments, starting with Segment One.

We start back in time about 2000 years ago. A bird called the Sacred Ibus enjoyed government protection by the Greeks. To kill one – even by accident – brought the death penalty. Wildlife habitat has since then been set aside, but usually for an elite group of people to enjoy, mostly royal families.

In North America, everyone is welcome to enjoy wildlife refuges, although they are for the benefit of wildlife, people from all over the world are welcome to visit most of them, and even activities like hunting and fishing are common when those activities benefit the wildlife.

The role of the Wildlife Refuge in Migrations

In addition to the wildlife refuge system, the government in the United States have some areas set aside for the study of  wildlife. Elkhorn Slough in California is one of those areas. Several government and non-government agencies work together there to study marine mammals such as sea otters and other species that live much of their lives in the ocean.

Additionally, conservation groups play a major role in protecting and restoring wildlife habitat. The Audubon Society is credited with saving roseate Spoonbills from extinction by providing safe areas for them. The Nature Conservancy provides refuge for various wildlife species in their private reserves. The National Wildlife Federation supports scientific research which agencies use in the management decisions of public land.

This episode provides a great opportunity for viewers to chart the progress they’re making with Ramping Up your English. From time-to-time viewers are urged to estimate the percentage of content they understand when watching a video. This episode featured two parts of a video about wildlife refuges. Viewers were asked to estimate that comprehension after watch part one. Then they were asked to do the same; however this time they knew they were going to do it BEFORE watching the second part. We illustrated a simple graph to show progress over time.

Here’s the same video on archive.org. It’s ad-free and can be downloaded. Click here.

Repeat the video about Wildlife Refuges. See if you understand more with a second viewing. Alternately, find and watch a different video about wildlife refuges and see how much you comprehend.

You can watch the entire Episode 69 on Archive.org. All you have to do is click here, and then use the back arrow to return to this page.

To learn about Endangered Species, you’ll want to watch Episode 70. Click here to go to the Episode 70 page.