Labor History and Pullman Porters; that’s the content of Episode 5. We’re using conjunctions to show cause/effect relationships in this episode, and we feature an excellent book for those approaching the advanced level of English proficiency. We also feature some basic contractions. 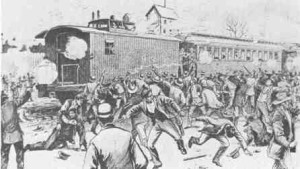 Thanks to my excellent technical crew and RVTV staff, I’ve successfully produced Episode 5 of Ramping Up your English.  It’s been entered in the rotation for RVTV Voices, and can be seen on Ashland Home Network channel 15 and Charter channel 182 in Southern Oregon.

See below for details about the unit and the web-based activities that can help you elevate your English proficiency.

Episode topic: The role of Railroads in the Labor Movement and the role of Pullman Porters in the Civil Rights Movement.

Lesson Objective: Use conjunctions to communicate cause/effect relationships. Use contractions for use of mainstream English expressions.

In Episodes 3 and 4, we used verbs to relate past events.  This labor history is also from the past, but our objective is to show a cause/effect relationship in a complex issue of multiple causation.

Below is a link to the same video, renamed Railroad Unions, and posted on Archive.org

Here are some of the slides we used in Episode 5:

Partial collapse of the economy

Strikes spread across the country

Violence by some railroads and some workers

The Great Railroad Strike of 1877 occurred because of a number of factors.  The strike was touched off due to a cut in wages for railroad workers; however, there were other conditions that contributed to the strike. Those included the partial collapse of the economy, long work days, and dangerous working conditions.

The word it and the word is are joined to make the contraction it’s.  The apostrophe – which looks like a comma hanging in the air – takes the place of  the letter i in the word is.

The word was and the word not merge to make the contraction wasn’t. The apostrophe takes the place of the the letter o in the word not.

Here, the word did joins with the word not to make the contraction didn’t.  Like the previous example, the apostrophe takes the place of the letter o in not.

Here the word that combines with the word is to form that’s.  The apostrophe takes the place of the letter i in is. That’s… 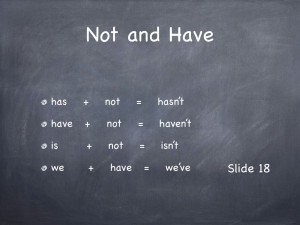 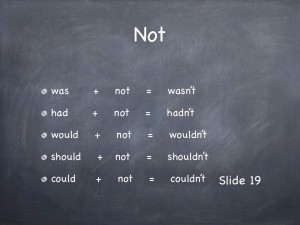 After watching Pullman Porters, use the conjunctions Because (of) and Due to in order to link the causes and effects as contained in the video.

Here’s a link to a video clip about Pullman Porters. The TV Progam Democracy Now produced a video about Pullman Porters.  Click here to watch that one.Here’s another video about the City of Pullman, where the Pullman cars were made and the home of many Pullman workers.  It’s now a neighborhood of Chicago. The next link will take you to the rise and fall of George Pullman, his company, and Pullman, Illinois.

Language: for further lists and rules about forming contractions in English, I recommend going to a wikipedia list.

Just be careful about some that don’t sound very smooth. Example: had’t’ve, somebody’d’ve, and my favorite – y’all’d’ve. But if you hear or read these, the chart will help you figure out what they mean. They may be great for writing dialogue, but I wouldn’t recommend using them otherwise.

Acknowledgements: Much of the historical background came from wikipedia and from the book Rising from the rails.

These fine people did a great deal of work to produce the show you see today.  One important job among these is that of putting up the set.  It’s so basic to the success of any program, and these guys are so good at doing it, that it can easily be taken for granted.  It shouldn’t be.  There’s often heavy lifting, positioning the elements to produce the look of the program, technical knowledge in setting up the laptop and the monitor that viewers see on the program.  With their eye of detail, they create the space that viewers see and that the host uses, eliminating distractions.  All glory to the set designers!  For this episode, the set designers also set up the microphone for the host.

So, what do you think you’ll see in Episode 6?  Click here to find out.