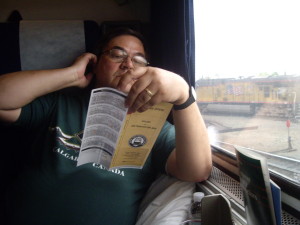 Amtrak’s Southwest Chief takes us to Los Angeles, as we revisit conversation groups, and peek into one of the world’s greatest railroad museums! Welcome aboard! A special welcome to students of the parent outreach of the Medford School District. I look forward to working with you in the fall.

Amtrak’s Southwest Chief traces the Santa Fe Railroad’s historic route to the Southwest on legendary trains like the Super Chief.  If you’ve watched all our episodes up to now, you’ll comprehend a great amount of the English contained in today’s program and the video clips contained therein.

Our episodes are produced in 30 minute chunks.  If you prefer to watch in smaller segments of time, then click below to view by segment.  Most segments are from 8 to 12 minutes.

Click here to watch part 4 of the Southwest Chief Westbound. To watch the same video without ads, visit archive.org. You can watch and download the video. Click here.

Click here to watch the video clip about the California State Railroad Museum. The museum video can also be watched and downloaded by clicking here.

Language Objectives: Use knowledge of previous unit presentations to comprehend video clips on a train journey and on a museum dedicated to the unit theme of Trains and Railroads. Join or set up an English conversation group.

Academic Content Objectives: Geography: Describe geographic features of the American Southwest in Northern Arizona and Southeast California.  Transportation: Trace the mainline route of the Atchison, Topeka, and Santa Fe Railroad from Chicago to Los Angeles. Identify railroad  equipment used by Southern Pacific on the Transcontinental route and the engineering challenges of building a railroad through the mountains and the features that were constructed to meet those challenges.  Explain how engineering features of the Transcontinental railroad facilitated rail transportation through extremely difficult conditions. History: Describe the history of the Transcontinental Railroad from the perspective of the Central Pacific Railroad and the role of the “Big Four” in its construction. Trace the development of the Southern Pacific Railroad, and its role in developing the second transcontinental railroad.  Analyse the impact of Southern Pacific on the development of California’s economy and culture. Explain how consrtuction of the Transcontinental Railroad impacted the movement of goods and people in the United States.

Listening comprehension is the main skill addressed in today’s program, but we also offer some tips on participating in conversation groups.  Speaking skills are essential in ramping up your level of English.  Our theme of Trains and Railroads can provide a common fund of knowledge to facilitate conversation.  Our previous episode (Episode 27) also addressed conversation groups, and the episode 27 page contains links that can help you find conversation groups in Southern Oregon. You can google the area in which you live with the words “English Conversation Groups” and you’ll probably learn of resources in your local area.  You can also start your own conversation group, as suggested in this episode.

Episode 28 also features a visit to the California State Railroad Museum in Sacramento.  You get to see the first steam locomotive on the West Coast of the United States, named the Governor Stanford after one of the “Big Four” who built the Western end of the Transcontinental Railroad and went on to build the Southern Pacific Railroad empire. There’s a lot more, including the famous golden spike that tied the Transcontinental railroad together, and historic cab-forward locomotives as well as other important rolling stock.  As you see in the video clip, the museum is also about the future. The link to that clip is located above.

There’s no homework or specific language function beyond listening comprehension connected to this episode.  To continue with the course, visit the Episode 29 page.